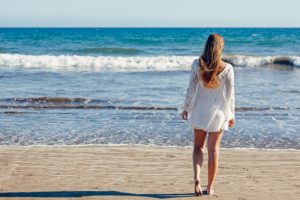 Ms. B1 is a 21 year old female who was diagnosed with Postural Orthostatic Tachycardia Syndrome (POTS) in May 2011. She came to the POTS Treatment Center in Dallas, Texas in January 2013 for a two-week training program. She also returned for one week of follow-up treatment in April 2013. Prior to coming to the POTS Treatment Center, she had undergone bio-identical hormone therapy that did not help to relieve symptoms. She had stopped high school as a senior due to the severity of her symptoms. She had been active in soccer, dance, and gymnastics, and was a member of the National Honor Society. She was also in the marching band, but had to stop due to symptoms. She reports being very competitive. She also reported a lot of pressure from school and deadlines. She became unable to stay in touch with her classmates, but could occasionally go to the mall. She did belong to a church group and also had social support from other girls.

Treatment during the two-week program consisted of education and training in nutrition, relaxation techniques, biofeedback, and standing and exercise techniques. Training was done for about 3 hours a day, five days each week. She reported beginning to feel symptom improvements by the fourth day of treatment. She saw a reduction in most of her symptoms by the end of the two-week program (see symptom rating chart below). At that time, she felt her symptoms had reduced by 30%.

Ms. B1 continued practicing relaxation, biofeedback, and other skills on a regular basis at home after completing the two-week program. She reported continued improvements during that time. Ms. B1 returned to the POTS Treatment Center two months after her two-week training for an additional week of treatment and follow-up. During that week, training consisted of biofeedback, relaxation, standing, and exercise techniques. She reported an even greater decrease in symptoms at that time (see symptom rating chart below), and felt like her symptoms had reduced by 70%. She also showed additional decreases in symptoms of depression and anxiety at that time. Her BDI-II score decreased to 12, and her BAI score decreased to 9, indicating mild to moderate levels of depression and mild symptoms of anxiety. She reported being able to sleep through the night, decreased digestive issues, decreased headaches, decreased joint swelling, and no longer passing out or getting dizzy. She felt she was more aware of when a migraine was coming, and could use her relaxation skills to prevent it from occurring.

After her initial treatment and continued home practice, Ms. B1 was able to return to school and also work part time. She was also able to exercise three times a week, including biking, walking, and rowing. Since that time she has also made it to her junior year of college.