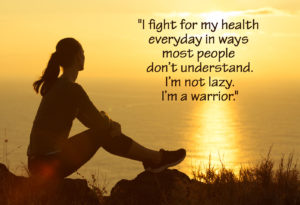 Ms W is a 22 year old female with prior diagnoses of interstitial cystitis, endometriosis, fibromyalgia, myositis, and cysts on her spleen. She experienced symptoms of a viral infection in November 2010, including headaches and ear infections. Later testing indicated that those symptoms were likely due to mononucleosis. In December 2010, Ms W was hospitalized due to extreme leg pain and exhaustion. Other symptoms included pre-syncope and syncope, migraines, sensitivity to light and sound, ear pain, neck and jaw pain with jaw popping, chronic diarrhea and irritable bowel symptoms, vomiting, and muscle spasms in her legs. She had multiple emergency room visits for varying reasons such as back, kidney, and head pain, and a head injury from fainting. She was diagnosed with Postural Orthostatic Tachycardia Syndrome (POTS) in June 2012. She underwent many treatments, including multiple prescription medications, acupuncture, pelvic floor biofeedback, yoga and yogic breathing, light therapy, Reiki, massage, infusions, and a program for fibromyalgia.

Prior to the onset of symptoms, Ms W was a runner, waitress, and life guard, and also played the flute. Her symptoms became too severe for her to do these things anymore, but she was able to attend college and take online courses. She was using a wheel chair daily due to her symptoms, which included syncope. She states that she had lost a lot of muscle. She was only able to do minimal exercise, and any exertion or standing aggravated her symptoms. At one point she was bed-ridden. She felt her symptoms negatively impacted her overall quality of life.

Ms W began treatment at the POTS Treatment Center in Dallas, Texas in May 2014. Treatment consisted two weeks of daily sessions lasting about 3 hours. Treatment modalities included training in self-regulation of the autonomic nervous system, and education in techniques for sleep, standing, nutrition and supplements, and exercise. Her short-term goals were to stop using her wheel chair and to feel stronger. Her long-term goals were to completely heal and help others to heal. She experienced a reduction in pain and tachycardia after her first session. She was able to begin decreasing medications for pain during the first week of treatment. Towards the end of the second week of treatment, most of her symptoms were gone (see symptom chart below). By the end of the two-week program, she was feeling much more capable of daily functioning and activity. She looked forward to returning back to her college without the use of a wheelchair so that she could use the recreation center.

Two and a half years after her completion of the two-week treatment program, Ms. W has graduated from college with two Bachelor’s degrees and is now a Master’s student abroad. She reports regularly practicing yoga and light jogging. She is still utilizing the skills and techniques from her training during this program to help her manage daily stress and symptoms, and she reports enjoying a higher quality of life than she ever thought possible before the treatment program.

Learn more about our POTS treatment options here, or call us today at (888) 352-8066 for a free phone consultation.

← Case Study – Ms. G1 – Maintained Improvement After 3 years
Do You Have Food Sensitivities? →