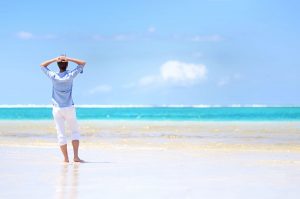 Mr. B is a 31 year-old male from San Antonio, Texas. His symptoms started in December of 2010 after he contracted pneumonia while in the hospital recovering from an appendectomy. His main symptoms were blackouts, severe headaches, tremors and brain fog. He was originally diagnosed with seizures and placed on medication to control his seizures. He tried multiple seizure medications for a full year before an EEG showed that he did not have seizures. He was diagnosed with Postural Orthostatic Tachycardia Syndrome (POTS) via a tilt table test in November of 2012. Although he was able to control his blackouts with medication, Mr. B still experienced headaches, tremors and brain fog. He was referred to the POTS Treatment Center by Dr. Suleman.

He began treatment at the POTS Treatment Center in Dallas, Texas in June of 2014 for an intensive two week treatment program. Treatment consisted of sessions 5 days a week averaging 3 hours per session. Training included diaphragmatic breathing, Heart Rate Variability Training, EMG biofeedback, peripheral hand temperature biofeedback, EDR biofeedback, standing and exercise techniques, nutrition supplements, sleep/stress management and other health and behavior interventions. He reported feeling an initial improvement in symptoms by the fifth day. He noticed he was able to remain standing for 30 minutes without any dizziness, tachycardia or fatigue.  He also reported an overall decrease in symptoms by the end of the 2 weeks.